I didn’t taste much of what is on the menu at Urban Steam when I was there for the Radiantly Raw online ordering launch party at the beginning of December, but I did meet the owner and have a insanely delicious cracker crust pizza. From what I heard, ate and saw, I’m impressed. Like REALLY impressed.

Before I even get into how knowledgeable and enthusiastic the owner of Urban Steam is, let me do this cracker crust pizza justice. It had salami and balsamic on it (and other yummy things I can’t remember) and it was perfect. My love for pizza runs real deep and I don’t like imitators but this cracker crust pizza thing they’ve got going on, I like it.

Look at the gooeyness of the balsamic. 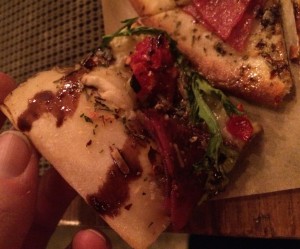 So after I ordered this the owner made a point to come chat with me just because I had shown so much interest in the menu (I like to know what I’m ordering!). He explained that although there is a regular menu, he uses whatever he has hanging around the kitchen to invent and create different foods and specials. That day it happened to be asparagus soup (which was also surprisingly tastier than it sounds). He was so excited to tell me about their coffee, which according to him, is the main draw to this brunch/sandwich/whiskey bar. I didn’t taste the coffee that night, but I did learn from friends who frequent this spot that it is just as good as explained AND that the Irish Coffee is probably the best in the Springs.

Here is the thing that stands out to me. Urban Steam isn’t located on a main strip in downtown or even in a popular area. It’s located in the industrial area of Sierra Madre where, unless you’re driving there for work, you aren’t going to pass. AND IT IS STILL IN BUSINESS. When a place with such a small food and drink menu (there are many, many whiskeys but not much of other alcoholic beverages) is located off the beaten path and stays open, there’s a reason for it.