Last night I attended one of the bi-weekly Colorado Springs Young Professionals Events. The CSYP host social events every two weeks to encourage members of the community to network as well as to support local businesses in Colorado Springs.

This week the event was hosted at one of my favorite bars in the Springs, The Principal’s Office, located inside Ivywild School, a former elementary schooled turned bar/brewery/bike shop/deli/market. The Principal’s Office is trendy with it’s shabby chic design, including chalkboard covered bar you can write on while you wait for the bartenders, as well as innovative, creatively named drinks such as the Catholic School Girl, Pink Slip, or my personal favorite, A Fresh Paddle.

Typically, you can’t go wrong with anything at The Principal’s Office and last night I decided to try something sweeter than I’d typically order. The Blackberry Smash was delicious. Delicious enough that I wished I didn’t have to work the next day so I could have a few more. It was made with freshly smashed blackberries (they smashed them once you ordered the drink), lime (maybe lemon?), bourbon, mint and something sparkling to give it some bubbles. 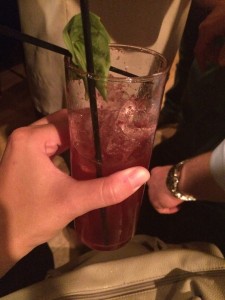 The Blackberry Smash at The Principal’s Office inside Ivywild School.

I’m not a dark liquor drinker – bourbon, whiskey, anything not clear is usually not my style – however The Principal’s Office always gets it right with their lighter drinks made with local ingredients – including the booze! The Blackberry Smash was sweet but not too sweet, you could taste the bourbon but not in a “this doesn’t go with fruit” way.

I recommend heading to The Principal’s Office for “detention” from 3 p.m. to 10 p.m. on Monday nights. There’s $6 drinks, $1 off Draft Beers and $2 off glasses of wine, which is a great deal for a hand-crafted drink.