This past March my best friend from college, Lauren, booked a trip to Colorado so we could have a girls weekend and I was ecstatic! Lauren and I have very similar tastes when it comes to food, wine and fun, so I knew that getting to show her around Colorado Springs would be a blast, however her flight on Friday night came in late, so we decided we’d do some exploring in Denver before coming back to the Springs on Saturday.

When we woke up Saturday morning we weighed our options for breakfast and places we could walk/jog/run since it was sunny and beautiful. The Denver Biscuit Company was just about a mile and a half away so we laced up our running shoes and jogged over to what is supposedly one of the most delicious, and most popular, places to grab a bite. It was still early, maybe 8 a.m. or 8:30 a.m., so we only waited about five minutes before being seated. We grabbed some coffee from the coffee table (it’s serve yourself which is AWESOME) and began to peruse our menus.

This is where the similar tastes thing comes in handy! We each had a few items in mind and decided we would order one sweet item and one savory item, that way we could trade off as we ate our way through the meal. I ordered The Franklin, which is one of their made-from-scratch biscuits topped with buttermilk fried chicken, bacon, cheddar cheese and smothered in sausage gravy. Lauren ordered The Dahlia which is a house-made sausage patty, apple butter, a fried egg and maple syrup housed between biscuit french toast. Yes you read that correctly – BISCUIT FRENCH TOAST. We were in heaven before our orders even came out!

When the server dropped our plates off, I couldn’t decide if I was excited or terrified. It was so much food. The biscuits are the size of your face and they don’t skimp on the fillings. Gravy oozed out of the Franklin and syrup pooled on the Dahlia’s plate. 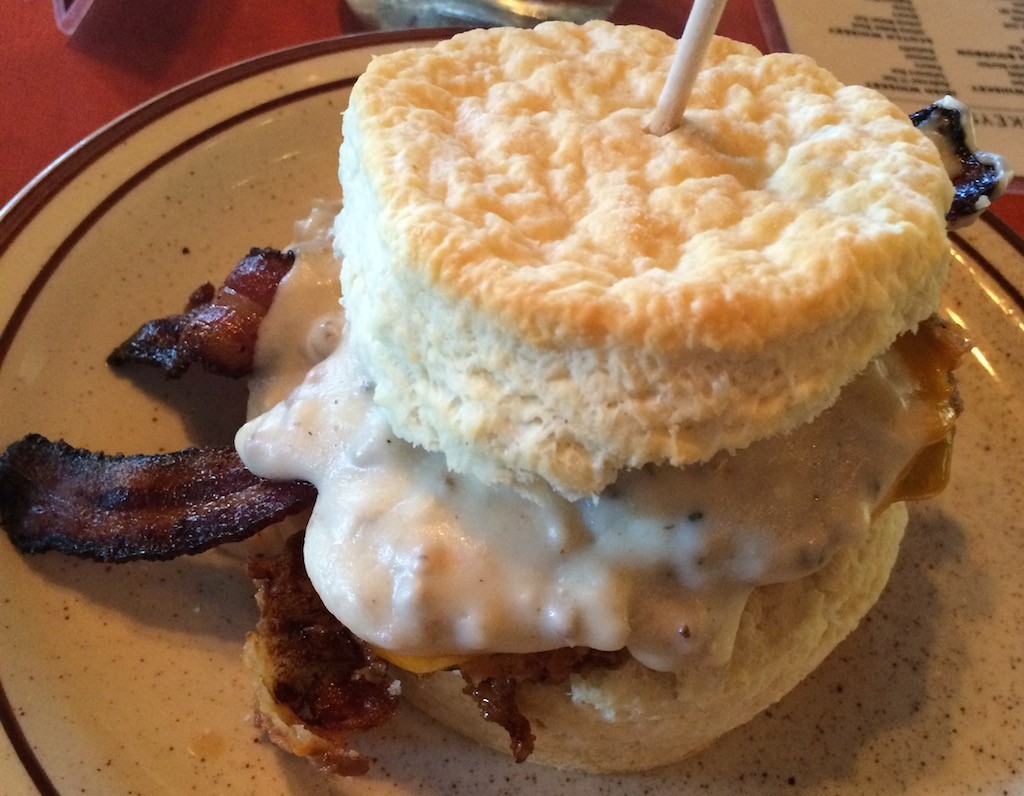 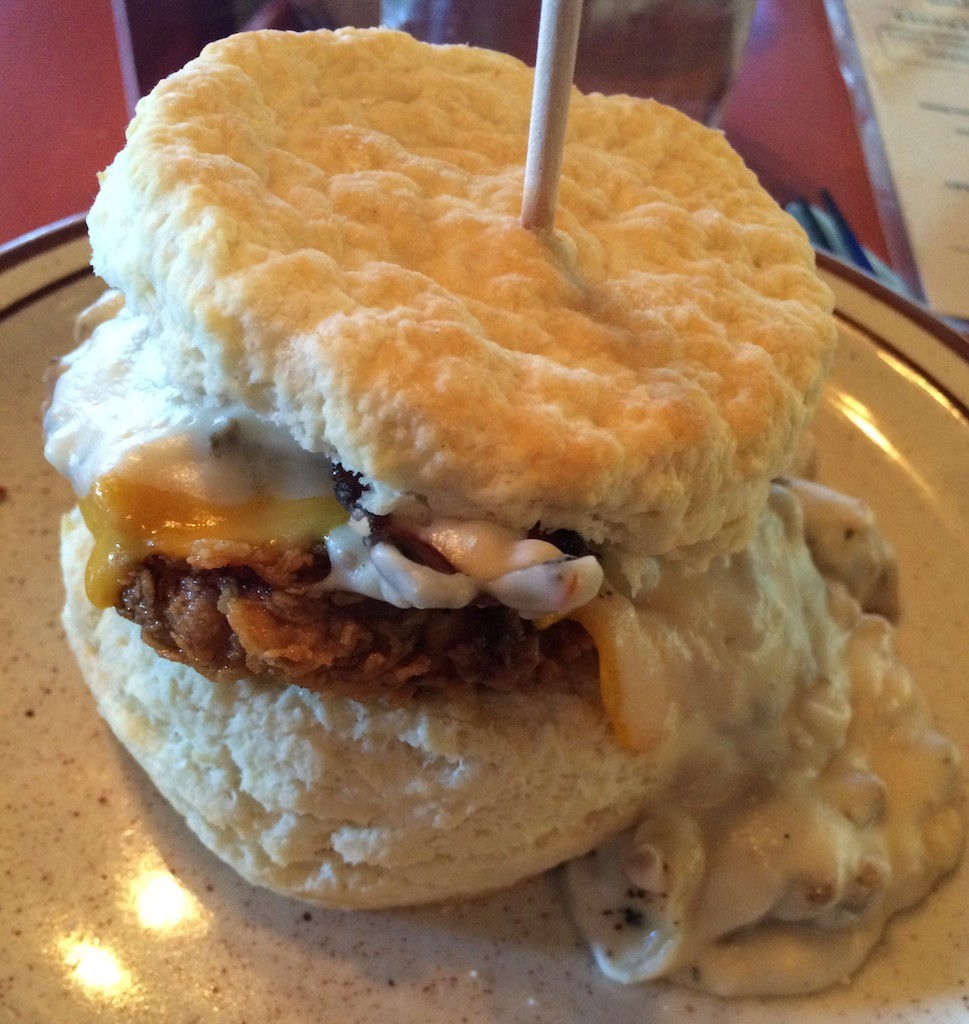 From another angle. Check out that oozing gravy! 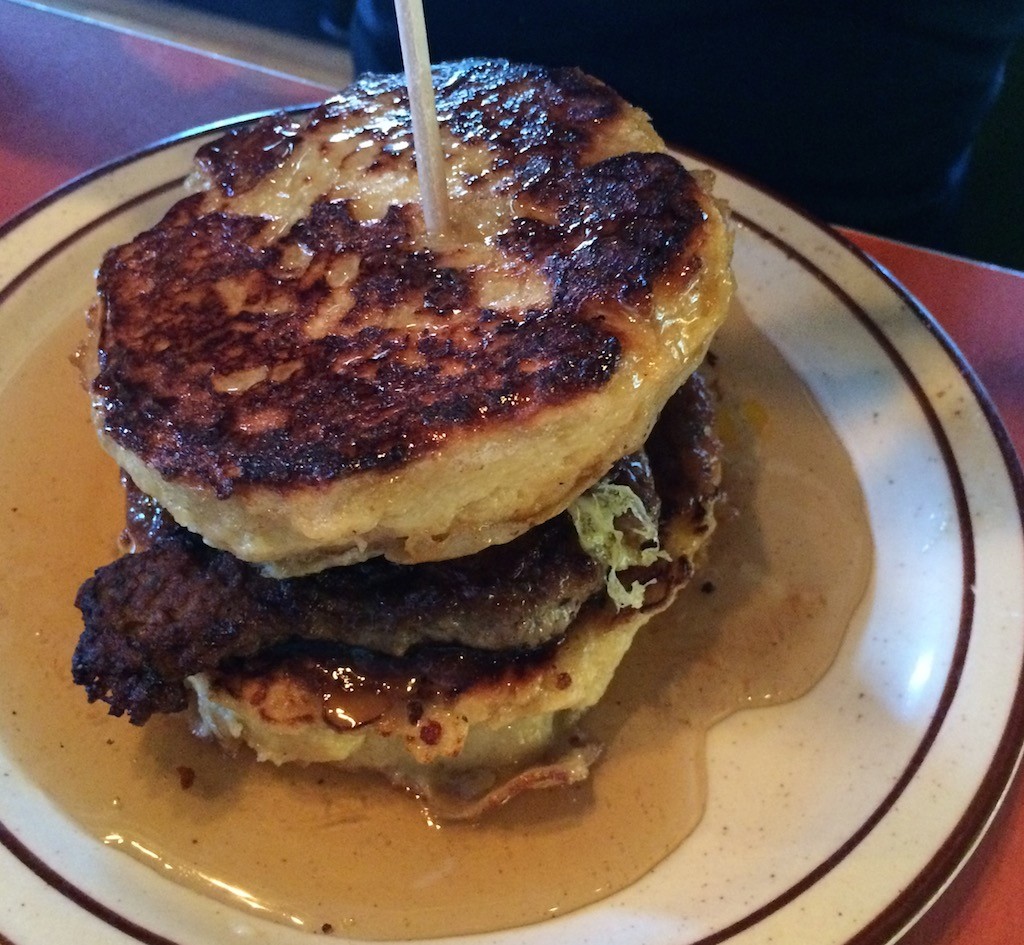 The biscuits were soft and tasty, the sausage in the gravy and on the Dahlia was delicious and the food was enough to feed at least three people.The french toast biscuits would be awesome on their own, too. I especialy enjoyed the apple butter on the Dahlia – it was so tasty. Going with something savory and sweet was a smart move because of how large the plates were. We would each eat about five bites before passing our plates to the other person. I loved that I felt like I got my money’s worth, however we ate until we felt sick and still had leftovers. On the very slow walk home we had to take a few walking breaks. It was awesome and miserable.

Along with the amazing breakfast sandwich list, DBC also has a list of other items to order, such as biscuits and gravy, plain biscuit french toast and strawberry shortcake. The strawberry shortcake on these biscuits would be out of this world and I’m 100 percent sure that’s what I’ll order the next time I head here. If you’re in Denver, stop by one of the Denver Biscuit Company’s two locations for breakfast or even lunch, but make sure your pants aren’t too tight, especially if you, like me, have zero self control.