I’ve mentioned it before, but the Highlands area in Denver is my favorite place to walk around and get some shopping done. Several weeks ago, while it was still warm enough to sit outside, I called up a close friend of mine who lives in the city to meet me for some girl’s time. After looking up some of the places along 32nd Avenue, we decided to try out Mead St. Station, a little bar that had a creative sandwich menu and decently priced mimosas.

The sandwiches on this menu looked amazing and the poor waitress had to come back about three times before Kristen and I decided what we’d have to eat. Even then, we decided to each get something different and then split both meals. I ordered the Pear Melt with spicy potato wedges and Kristen ordered the Lowell Steak Sandwich with sweet potato fries. 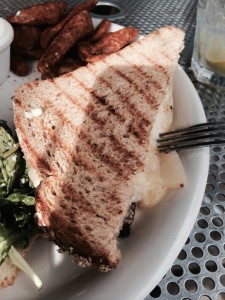 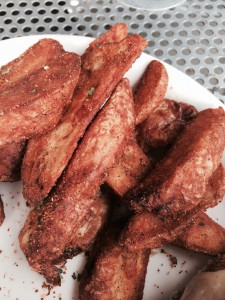 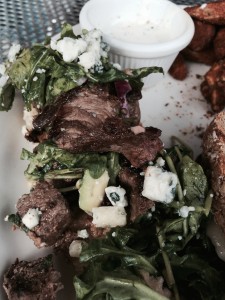 The Pear Melt was basically a fancy grilled cheese – it had poached pears, melted brie and havarti. I don’t know if it’s because I have a very REAL love for brie cheese, but it was out of this world. I thought that the bread might end up soggy from the pears but it stayed nice and toasty and there was a perfect cheese to fruit ratio. The spicy potato wedges were good, but there wasn’t anything particularly special about them.

The Lowell Steak Sandwich was an open-face sandwich with grilled steak, arugula, red onion, avocado, gorgonzola and a red wine vinaigrette on a ciabatta roll. It was also phenomenal, however I do think there are a few improvements that could be made. It was so hard to eat – we basically had to eat it like a salad. The ingredients all were delicious but it would’ve been nice to have more than a bite or two with all of the ingredients in it. Also, the steak was just a bit too tough. But even with those complaints, if you can even call them that, it was still much better than many other similar sandwiches I’ve tasted.

We also tasted their margaritas and mimosas which were good and very reasonably priced. Mead St. Station would be an awesome spot for an afternoon of watching football or catching up with a friend.

Mead St. Station is on 32nd Ave. between Lowell and Meade Streets in the Highlands neighborhood in Denver.