If you ever need to know one important fact about me it’s this: to me, PIZZA IS LIFE. No, really. I have a disgusting love/hate relationship with pizza. I love to eat it, and I hate to feel sick because I ate way too many slices. Sorry I have zero willpower.

I’ll eat pretty much any type of pizza and likely be satisfied (FYI, I have no shame in saying that the bacon-wrapped deep dish pizza from Little Caesars is way better than it sounds, and I enjoyed every bite). Until recently my favorite neapolitan pizza spot in Colorado Springs was Pizzeria Rustica – partly for the crust and partly for the bellinis – but I’ve been meaning to give Duca’s Neapolitan Pizza a try. Their first location is way up north off of Voyager and I just hadn’t found the willpower to drive that far when Pizzeria Rustica is just down the street. Lucky for me, Duca’s has opened a second location on Cheyenne Mountain Boulevard and I wasted no time in getting myself to their new restaurant.

I was ordering for myself and a friend and according to the girl on the phone one pizza fed one person (approximately) so I ordered us two pizzas and a small mediterranean salad.

The mediterranean salad was essentially pretty average, but the vinaigrette it was topped with was great! It was somewhat sweet, but not in a bad way. It wasn’t as acidic as a typical Greek salad dressing so it didn’t overpower the veggies and blended well with the olives and feta.

I tried to order one pizza with meat and one without, because #indecisive, but both ended up being great. The crust was thick on the edges but thin beneath the toppings, the sauce wasn’t overpowering and overall it was just a great pie. 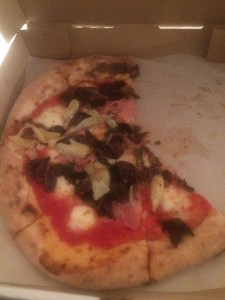 The first pizza was called the Capricciosa. Essentially it was a Margherita pizza topped with ham, oven roasted mushrooms, artichokes and kalamata olives. Typically I’m not a fan of mushrooms on my pizza because even when they’re fresh they always seem kinda slimy or like they weren’t cooked enough. THESE WERE PERFECT. I’m not sure if they truly roasted them in the oven before throwing them on top of the pizza, but they were crisp and flavorful. The topping combinations really brought the flavors together. This one was my favorite for sure. 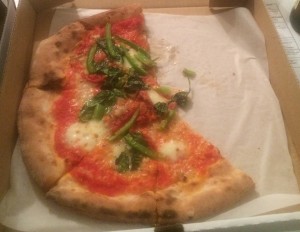 Next I ordered the Mama Rosa’s which was topped with marinara, spinach, sun-dried tomatoes, mozzarella and green peppers. I really enjoyed this one. The spinach didn’t wilt too much and I loved the sun-dried tomatoes. Although it was a great pizza, it just didn’t compare to the Capricciosa.

My only complaint was that near the end, the center of the pizza started to get a bit soggy. However, in Duca’s defense, this was a to-go order so it wasn’t as fresh AND the sogginess didn’t set in until about 30-40 minutes after we grabbed our first slice.

Overall, this is for sure a place that pizza lovers need to check out! It was super satisfying but didn’t make you feel like you were going to die of carb-overload (here’s looking at you bacon-wrapped deep dish). Their two locations make it easy no matter where in town you’re located and again, satisfying with less guilt.