As I was walking around Old Colorado City during Black Friday yesterday I saw someone walking out of the former Meadow Muffins location with the styrofoam white box that screams takeout. Since when is Meadow Muffins open again? Of course, nosy me couldn’t wait more than a few hours to try out the reopened restaurant, Mother Muff’s. Back in September, Meadow Muffins was sold to the owner of The Hatch Cover and has since been closed. According to the waitress, Mother Muff’s opened Wednesday and despite having no advertising at all (their Facebook Page wasn’t even made until Thursday night)  they’ve had a steady flow of customers coming in. 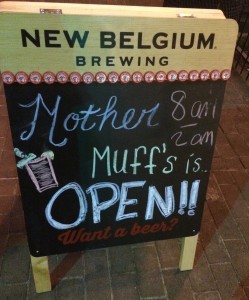 The only advertising I’ve seen for the newly opened restaurant.

Before I even begin writing about my experience there can we just get this out of the way – Mother Muff’s? Really? SUCH an obscure name. For many reasons.

When my friend Natalie and I got there the waitress handed us a thick drink book. After about 10 minutes of browsing and laughing at some of the names (hoochie mama, mommy dearest and the redheaded stepchild all were cocktail names), she ordered the “Hoochie Mama” and in honor of the holidays I ordered the “You’ll shoot your eye out, kid.” 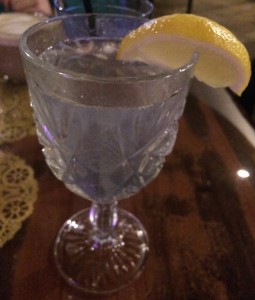 You’ll shoot your eye out, kid. 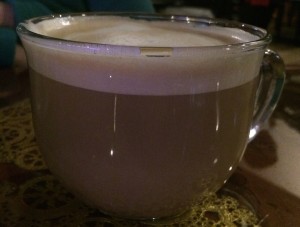 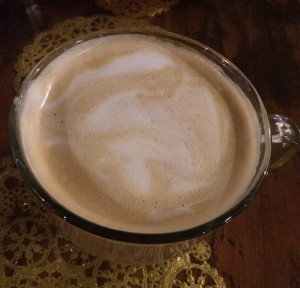 A top view of the Hoochie Mama

The Hoochie Mama was a boozey coffee drink that tasted like an Almond Joy. My drink was gin, lemon juice and champagne. I enjoyed it because I am a big fan of any type of champagne drink. We decided that our drinks were very much breakfast/brunch cocktails so even though it was evening, we ordered breakfast food, which they serve at all hours. I got the supreme breakfast pizza and Natalie the chicken and waffles. It was the perfect post-Thanksgiving meal. 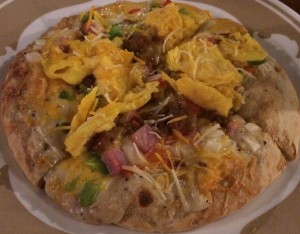 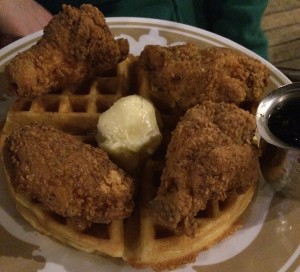 Both meals were delicious. I loved that my pizza’s crust was thick and that there were a ton of toppings. The chicken and waffles was definitely the star of the night, though. The chicken was crispy but not too breaded and the waffle was just a really good waffle. I’m normally a pancake person, but next time I go back to Mother Muff’s I will hands down order the waffles – with or without the chicken!

After dinner we decided to hang out for a while and have some friends meet us. We each ordered a different drink.

I ordered a “Redheaded Stepchild,” which isn’t actually what I meant to order so in full disclose I’m not positive what was in it. I do know it was a champagne drink and it was very strong. I don’t know that I’d order it again. I meant to order the “Strawberry Blonde” which was only strawberry puree and champagne. 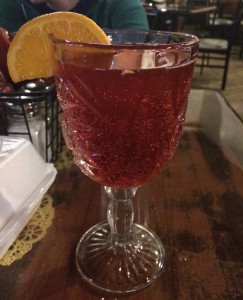 Someone ordered the “Painkiller.” It was a fruity drink that tasted like an unfrozen pina colada. It is very coconut flavored so if you aren’t a fan of coconut this isn’t for you. 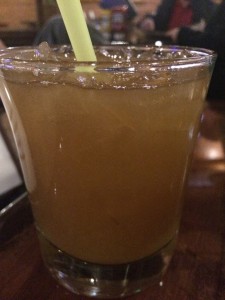 Finally, a mudslide was ordered. I didn’t taste this one but it looked very good and it supposedly was tasty. It looked like an adult milkshake – they had many on the menu and I’m excited to start tasting them. 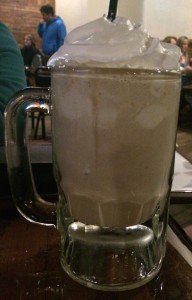 Before we left a live band began playing. Nothing too rowdy but it was still fun and it was nice because we could actually hear each other talk. My only complaint with live music in a bar/restaurant ever is that you have to yell to have a conversation and that wasn’t the case here.

Overall I think Mother Muff’s is really going to be a great addition to Old Colorado City’s restaurant and bar scene. I’m mostly excited for a new breakfast place in the area as Mountain Shadows can get pretty busy and I’m not a huge fan of the other offerings on the westside. It’ll also be nice to head across the street to Thunder and Buttons and vice versa, rather than having to go downtown to a new bar. Meadow Muffins has been missed but Mother’s Muffs seems like it’ll make up for it. Mother Muff’s is open every day from 8 a.m. to 2 a.m. and the kitchen closes at 1 a.m. They serve their full-menu, breakfast included, all day.